See Apostle Islands for the intro to this trip report. 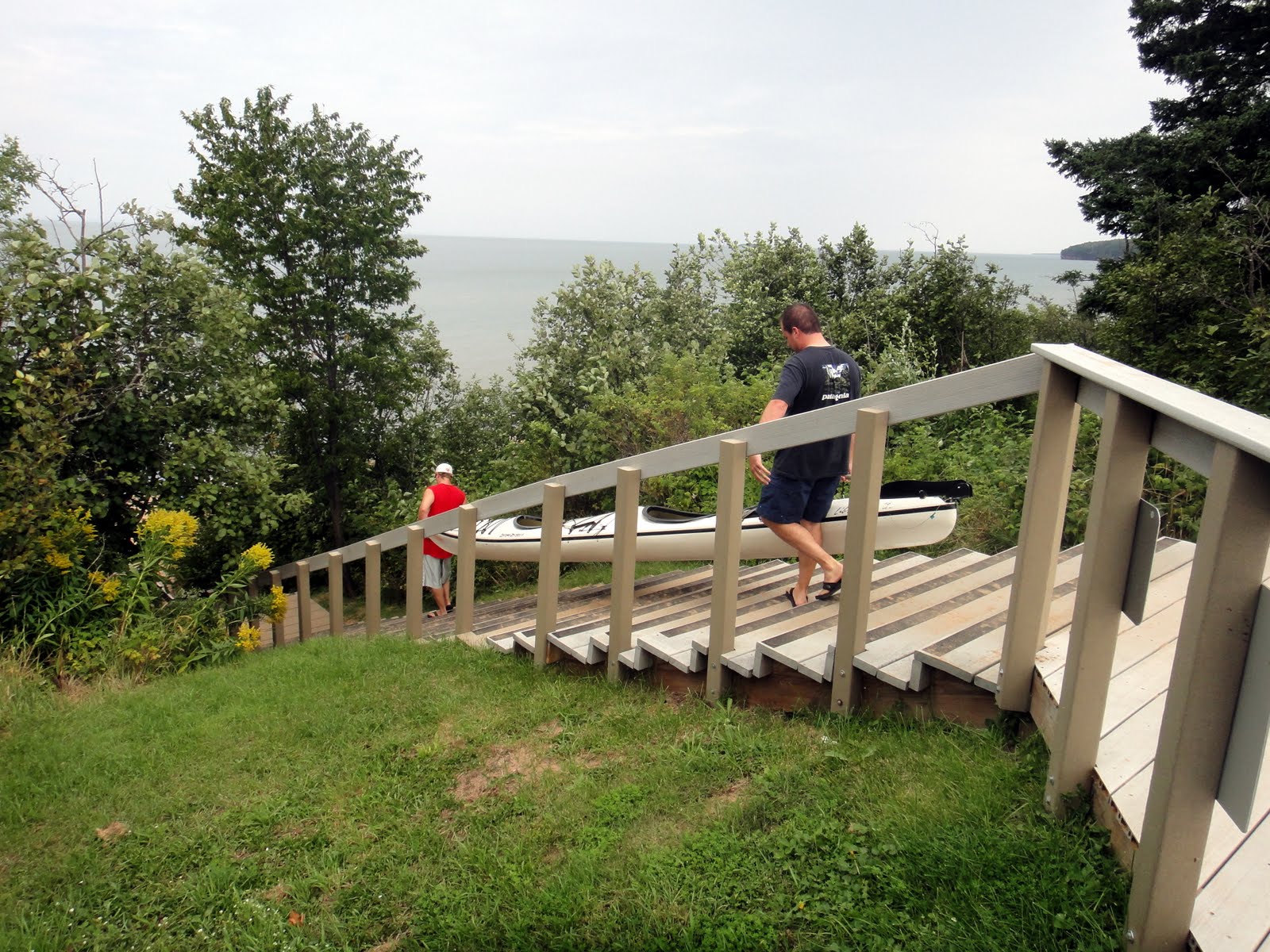 The entire week prior to the trip I had been keeping a close eye on the weather forecast. Kayaking up in Lake Superior can be a pretty horrible experience if the weather picks up and you can become stranded on one of the islands pretty easily. So as we were preparing to push off at Meyers Beach, the forecast was for rain that night or possibly the next morning. We would be out of communication (no 3g in these parts) for the next couple of days and would have to rely on our old school ways of reading the clouds and taking an educated guess.

The first leg of the trip took us along sea caves that were actually on the mainland. Once we got north of the caves, we would find our campsite. There is only one mainland campsite and it seemed like it didn’t get very much use. There is a 4 mile trail that leads from this site all the way back to Meyers Beach if one was so inclined to hike it. The guided tours that come out here spend the morning looking at the sea caves, have lunch on the beach just north of the caves, and then paddle back to Meyer’s Beach. 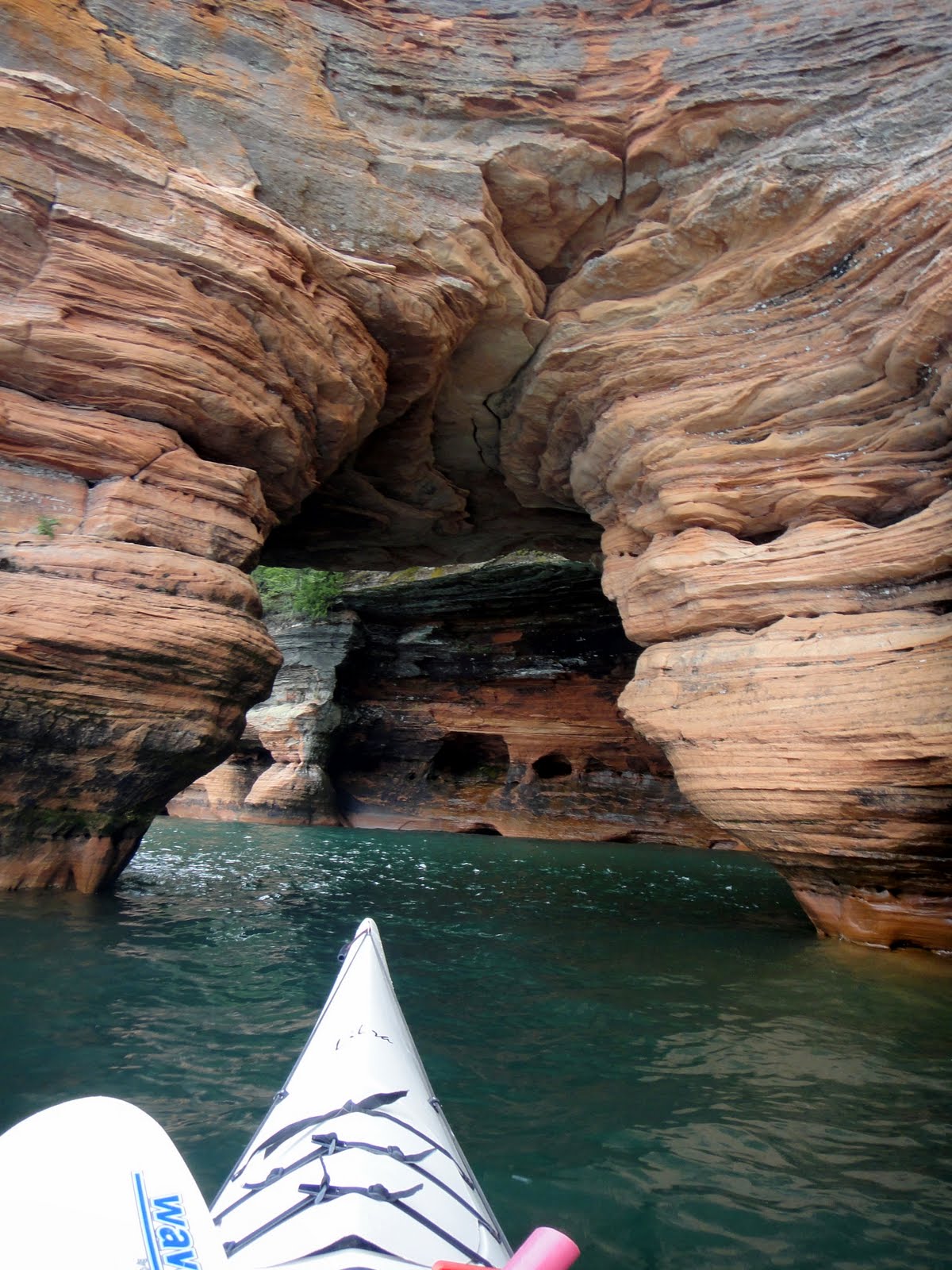 The caves were unlike anything I had seen in the water. They certainly had more of a Utah/west coast feel than northern Wisconsin.

There was a very interesting woosh sound that the waves made as they pushed under the rock formations into the caves. You could also tell that this was not a place you wanted to be when the weather or waves picked up. We lucked out and had great weather with a very low chop.

Once we made camp, we were able to appreciate the view and enjoy the rest of the afternoon. One thing that we didn’t appreciate were the damn black flies. Those things were everywhere and bit hard. It got so bad that we ended up bringing our dinner inside the tent just to find some relief. I wore my long johns (top and bottom) for most of the time we were in camp. 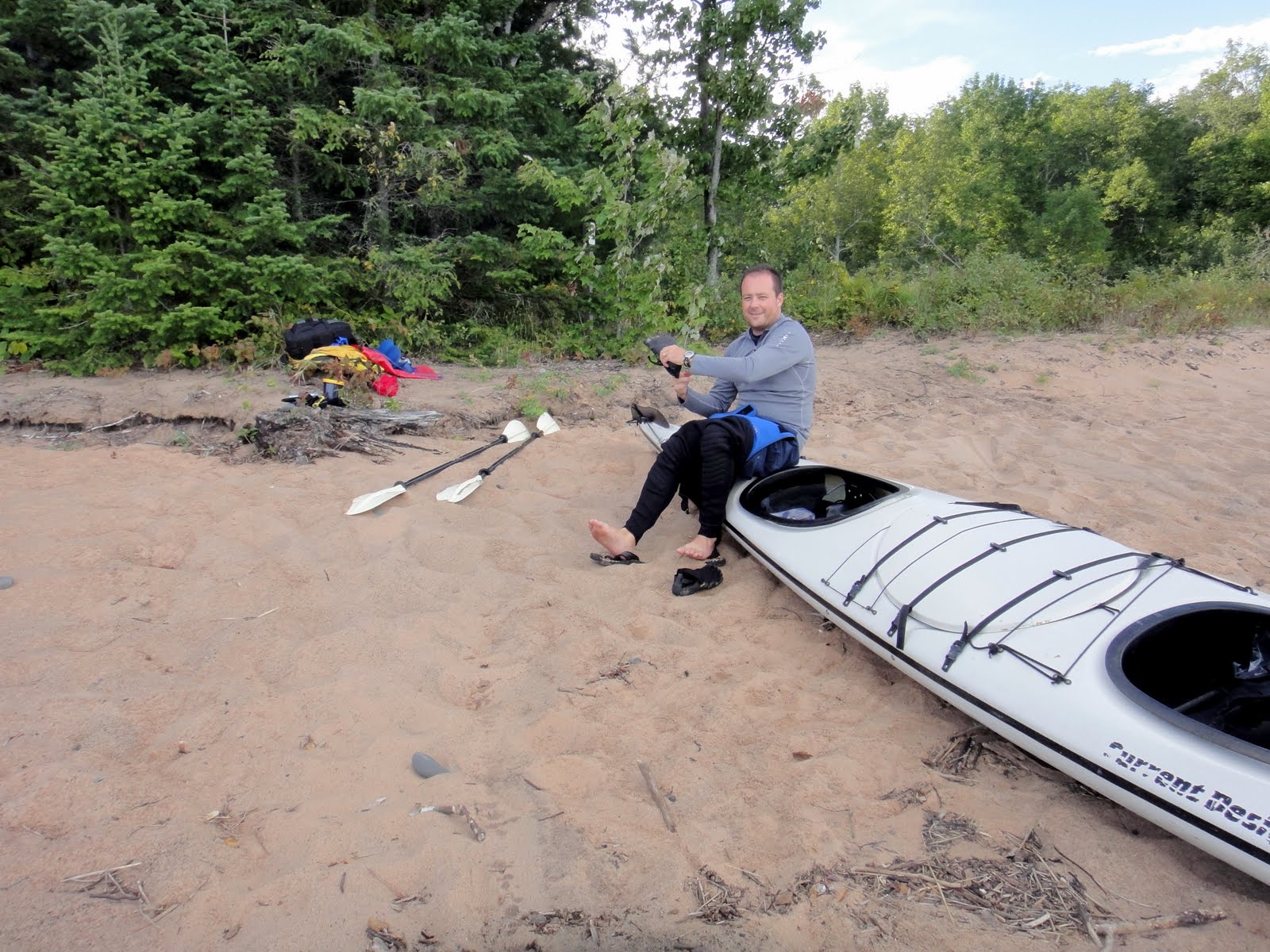 We were waiting for the rain to come, but it only drizzled a little and the big rain never hit. The next morning there was a stiff westward wind and it created some pretty good chop. This along with some looming clouds had us breaking camp and heading to Sand Island pretty quick… no point in hanging around and seeing if the weather gets worse!!

We paddled for a few hours and reached the bay on the east side of Sand Island. It’s amazing how close something looks while you are on the lake but spend the next 1-2 hours paddling just to realize you are half way. My back was sore from the previous day’s paddling so it probably felt longer than it actually was. Sand Island has a full time ranger stationed on it and it felt good getting back into some type of civilized environment. It was fun to be out on our own the previous day, but with the weather and kayaking in the open water, it just felt good to see some other folks around. 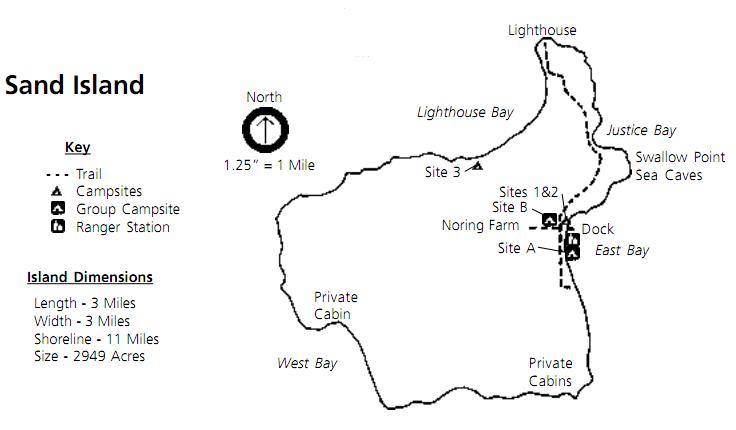 We made camp and then headed out to view the sea caves. These were AWESOME! Some of the best in all of the Apostles. You can get really far back into the caves and it’s shallow enough that you could get out and walk around if you were into that kind of thing. We had a great time paddling around and made our way to Justice Bay. This place looked like it could have been in the Virgin Islands. The sun was out, the water was clear and there was a sailboat right in the middle of the bay. 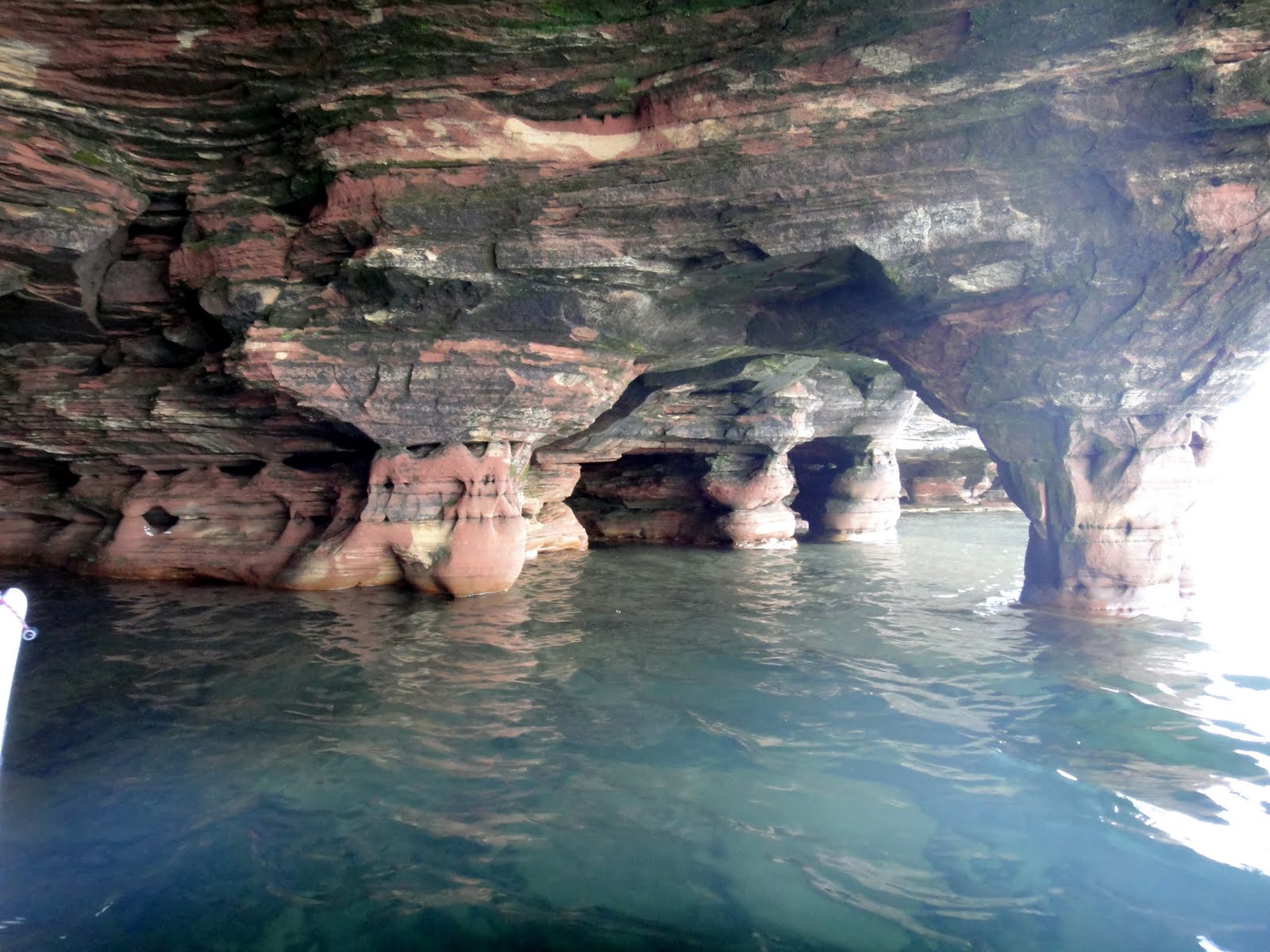 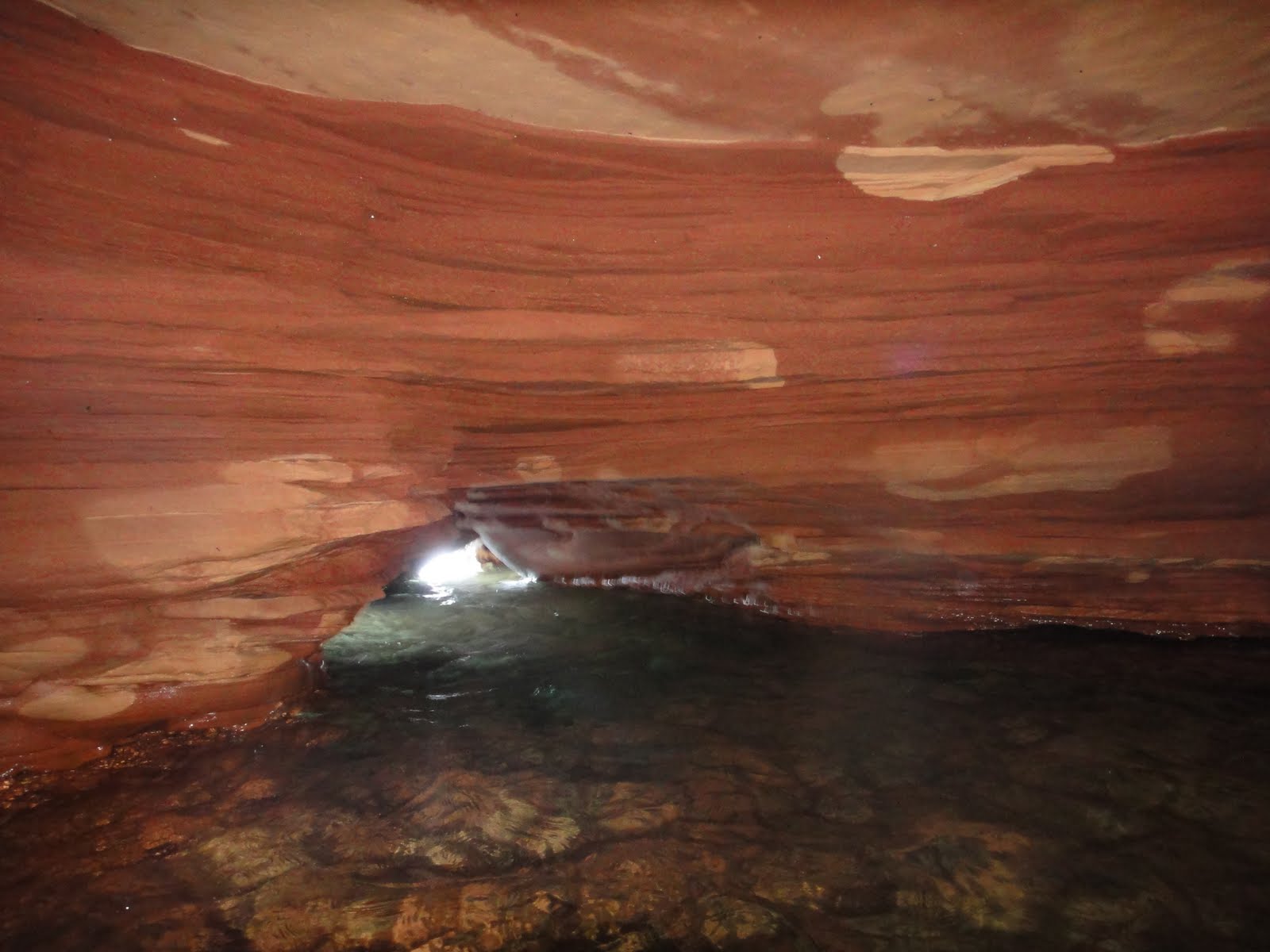 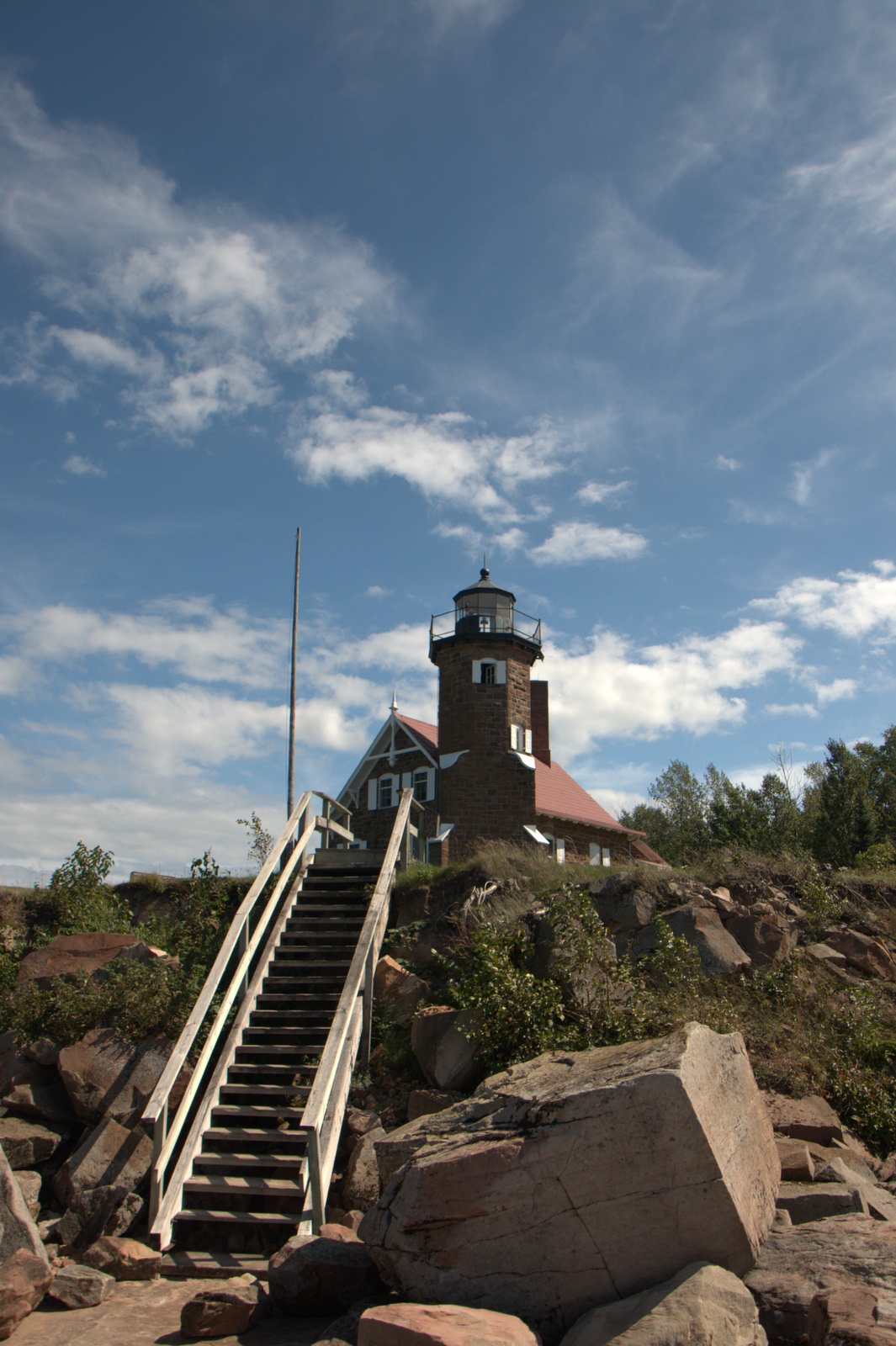 We hiked up to the lighthouse and got a tour from the resident ranger. It was pretty interesting to hear about the old lighthouse keeper and some of the stories about the area. Included in these stories was an interesting one regarding if the old keeper had killed his wife and then told everyone that she had ‘left’ him.  No one could figure out where she had left to… mystery and intrigue in the Apostles. We were able to climb all the way up to the top of the lighthouse and were rewarded with a view of several of the other islands. I also learned that the markings for a lighthouse on a map give you a lot of information. Height of the lighthouse, the color of the light and the frequency at which the light will flash. 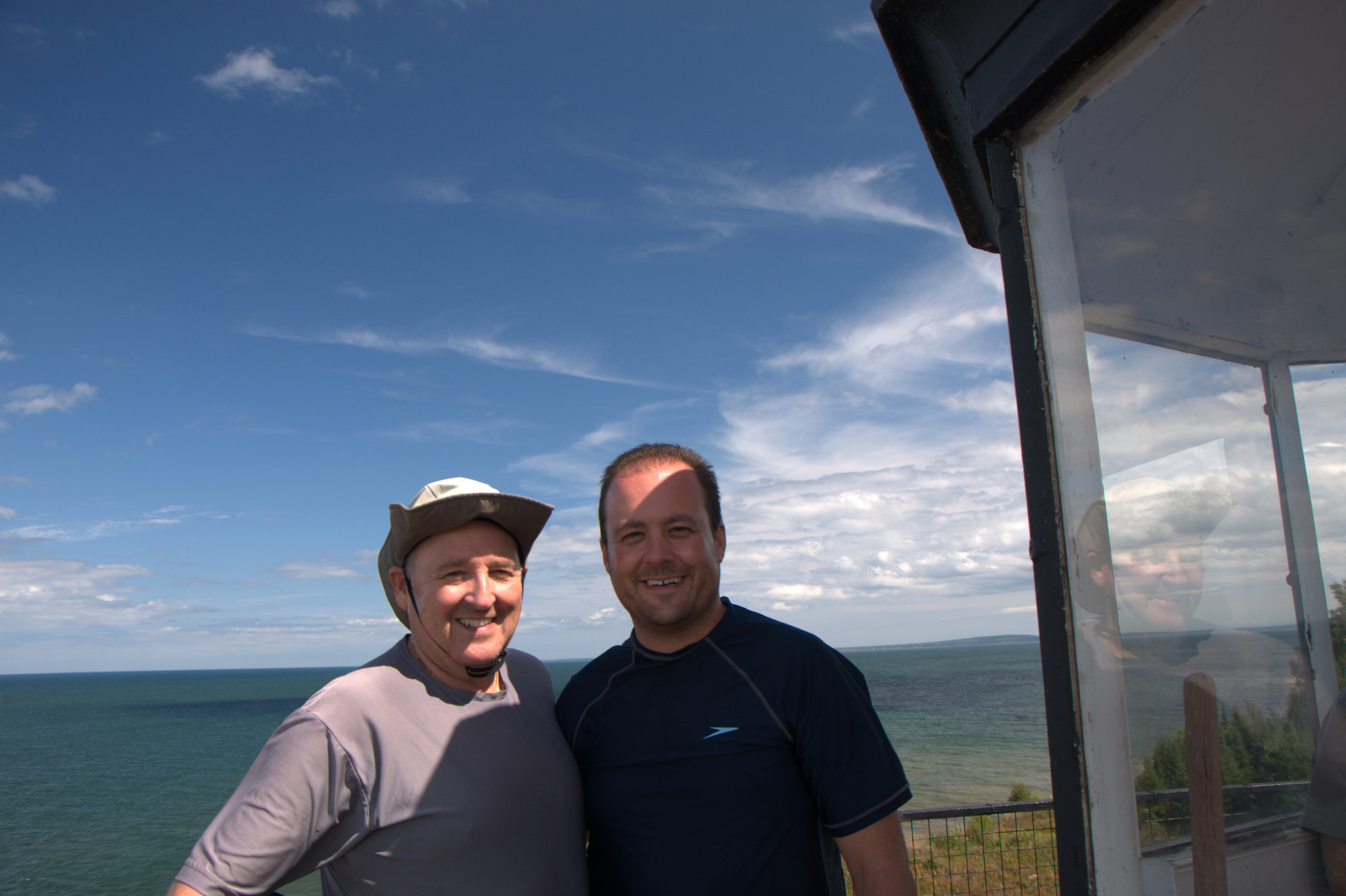 Oh, and guess who we ran into? The guy who was working at the visitor’s center when I came in looking for my camera bag. So my dad took a picture of us with our cameras. Nice!

We enjoyed a nice sunset and I went to bed hoping that the weather would be agreeable enough in the morning to allow us to cross Sand Bay over to the mainland so we would make our scheduled pickup.

We woke up, broke camp and made our way across to the mainland without much incident. I have to admit that crossing the few miles in the open lake did make me a bit nervous. Especially at the half way point when you look around and realize just how far away from land you are and that you are in this little kayak on top of the freezing cold water. It’s a good, healthy kind of fear. The kind that makes you glad to be alive and to be able to enjoy a trip like this with the old man.

This ranks up there with the top 1 or 2 breakfast spots I have even eaten at in my life.

I can easily see coming back up here with the whole family and doing another multi-day, multi-island trip. There is a lot to see in this area and it’s truly amazing how this unknown National Lakeshore is just sitting here in northern Wisconsin. 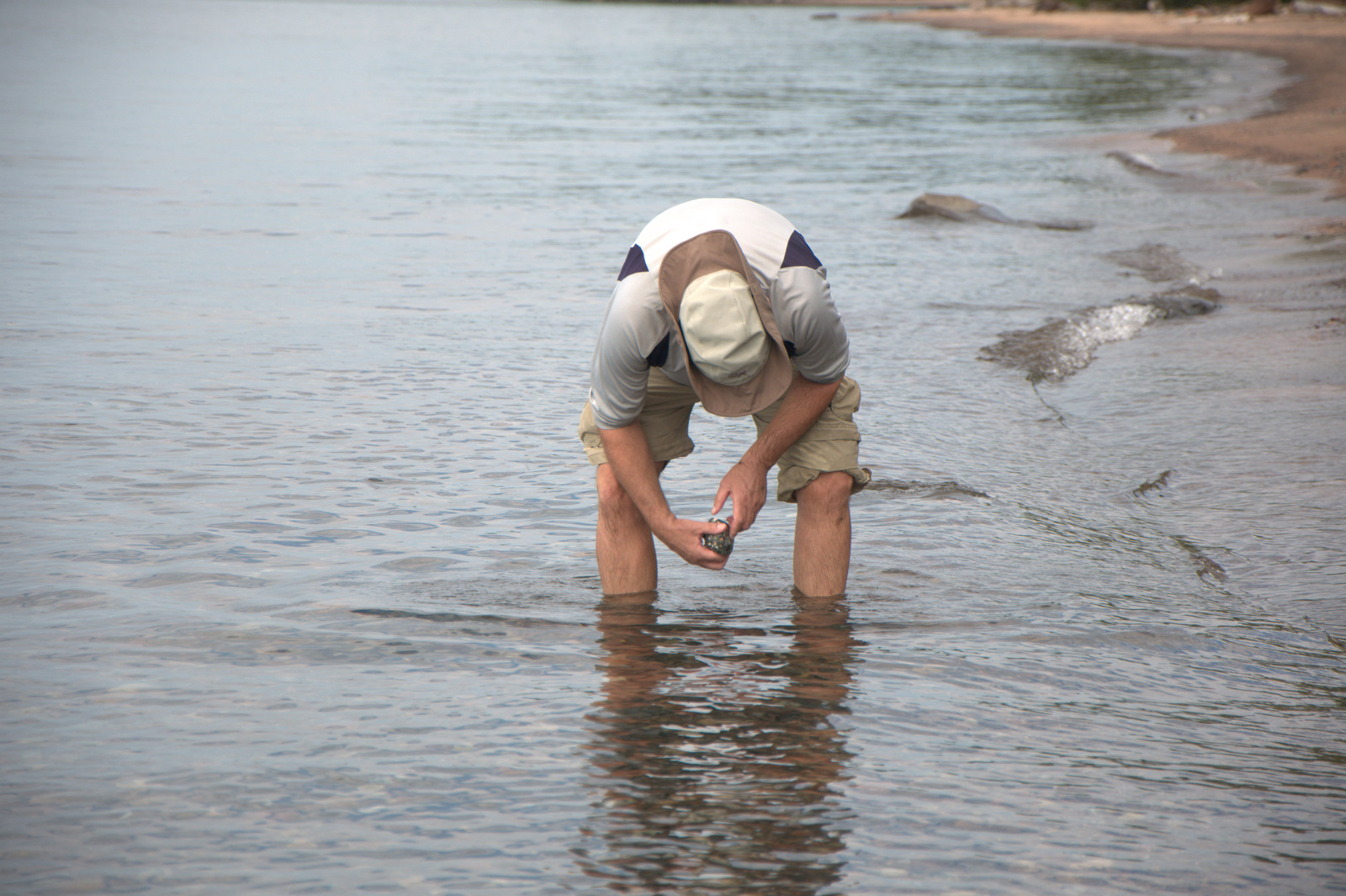 The old man on the hunt.

Loved this dock. The campsite on Sand Island is 100 yards back from this doc. 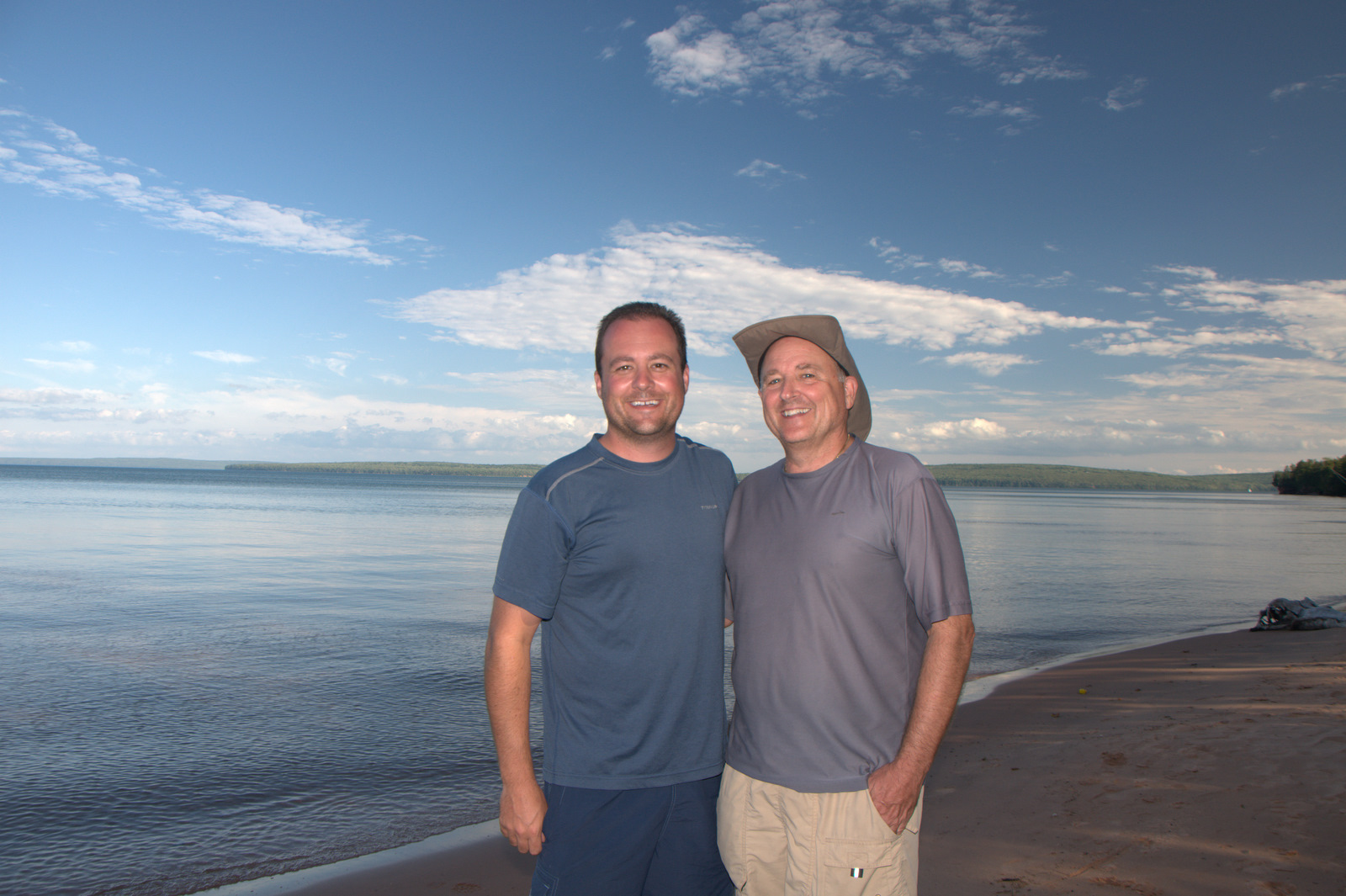 My current favorite picture of my dad and I. It turned out great and captures some of the beauty of the area as well.