The goal was to continue working on framing a few of the smaller walls and see if I could be ready for more help on Monday. Al (my father-in-law) and his good buddy Tom were coming over so I wanted to have things ready to go when they showed up. What ended up happening was I got stuck working on one problem area for 2 hours including 2 trips to depot because the bolts I got were 1″ too long.

The image below is roughly what I am following for my basic wall construction. For the 2 2×4 walls, I built them in a more traditional way. I still used the 3/4″ foam against the concrete, but the 2×4 wall is freestanding. The problem I ran into yesterday was that the 2×4 bottom plate (turned on edge) as seen in the picture needs to follow the wall and be attached with concrete anchors. Shouldn’t be a big deal, right? WRONG! As usual, you never know what little part is going to kick you in the ass and become a headache. It turns out that two of our walls (the two I chose to work on yesterday) have a significant bow in them and attaching the treated 2×4 at one end meant the other end stuck out a good 1.5-2″ from the wall. The damn 2.5″ ramset anchors wouldn’t hold so I had to find a way to bend the 2×4 to match the curve of the wall. I ended up going with some 3″ concrete bolts that you hammer in and then they expand as you tighten the nut. At 9 pm last night, I finally could put the done stamp on it.

It should also be noted that yesterday marked the first injury. While getting frustrated about the ramset not working, I swung and missed the ramset. Unfortunately, my forearm got in the way and I ended up hitting it full force. It was extremely painful and affected my ability to fully grip anything with my left hand the rest of the day. Luckily, it was much better this morning. Hopefully that was the last injury. 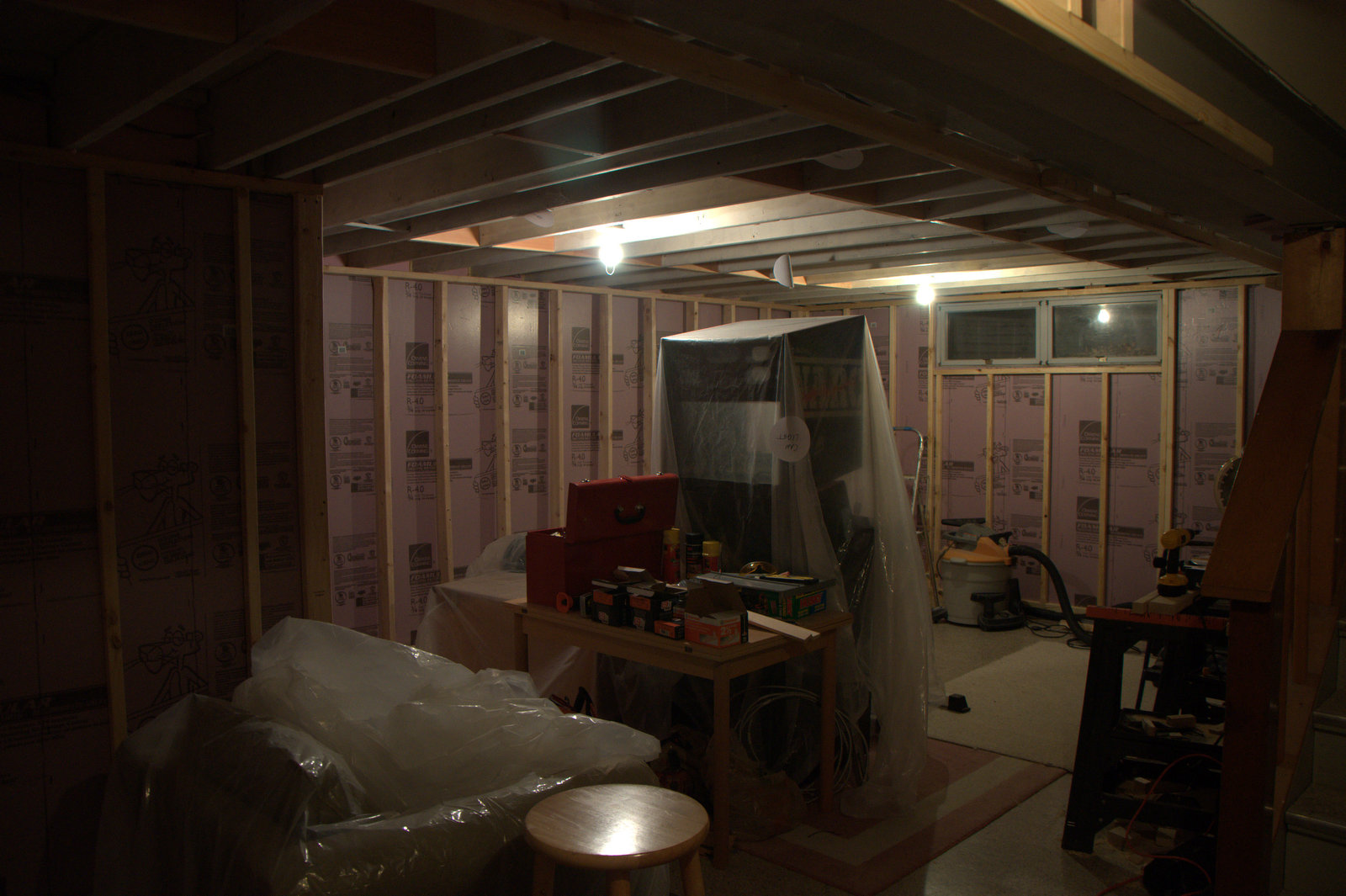 With all the great help I had today, almost all the framing is complete. I have some finishing touches on the soffit that I still need to do, but all the other walls are built and looking good. I did end up switching one wall which I planned on using 2x2s on to using 2x4s so I had to buy about 20 yesterday and will need to return a bunch of 2x2s later this week… what a pain.

I am all set for electric and I will start on that tomorrow before my electrician friend shows up on Wed./Thurs. He is stopping by tomorrow night to see what the project looks like and assess what we need in terms of materials. PROGRESS!

Today did mark the end of an era. 11 years ago, I bought my first major power tool, a Craftsman 10″ miter saw. While in high use today, the brake failed on it for the second time in the last 3 years (when you let go of the trigger the brake should make the saw stop spinning in a second or two… mine got so bad today and it didn’t do anything and just allowed the blade to keep spinning). We were forced to use the circular saw while Julie and my stepmother-in-law ran up to depot to pickup a new one. You can see it pictured below next to my drill. There is no way I was going to finish this basement without a miter box.

In other exciting news, I purchased boxes and boxes of screws since I know that my father-in-law is kind of crazy about having every size you can buy and wouldn’t you know it… I missed the exact size he thought was critical. 3″ coarse drywall screws. Goes to show that getting 1 1/4″ thought 2.5″ including have a few big boys (4+”) just in case doesn’t cut it. Luckily he had some in his gear so it wasn’t a total loss.

Also, you may have noticed that the squat rack/gym equipment featured in earlier posts is no longer in the updated pictures. For the first time ever, posting on Craig’s list has worked for us. I will be delivering all our exercise gear on Sat. morning to a guy in McHenry, IL that seems very, very excited to get it. A win/win. 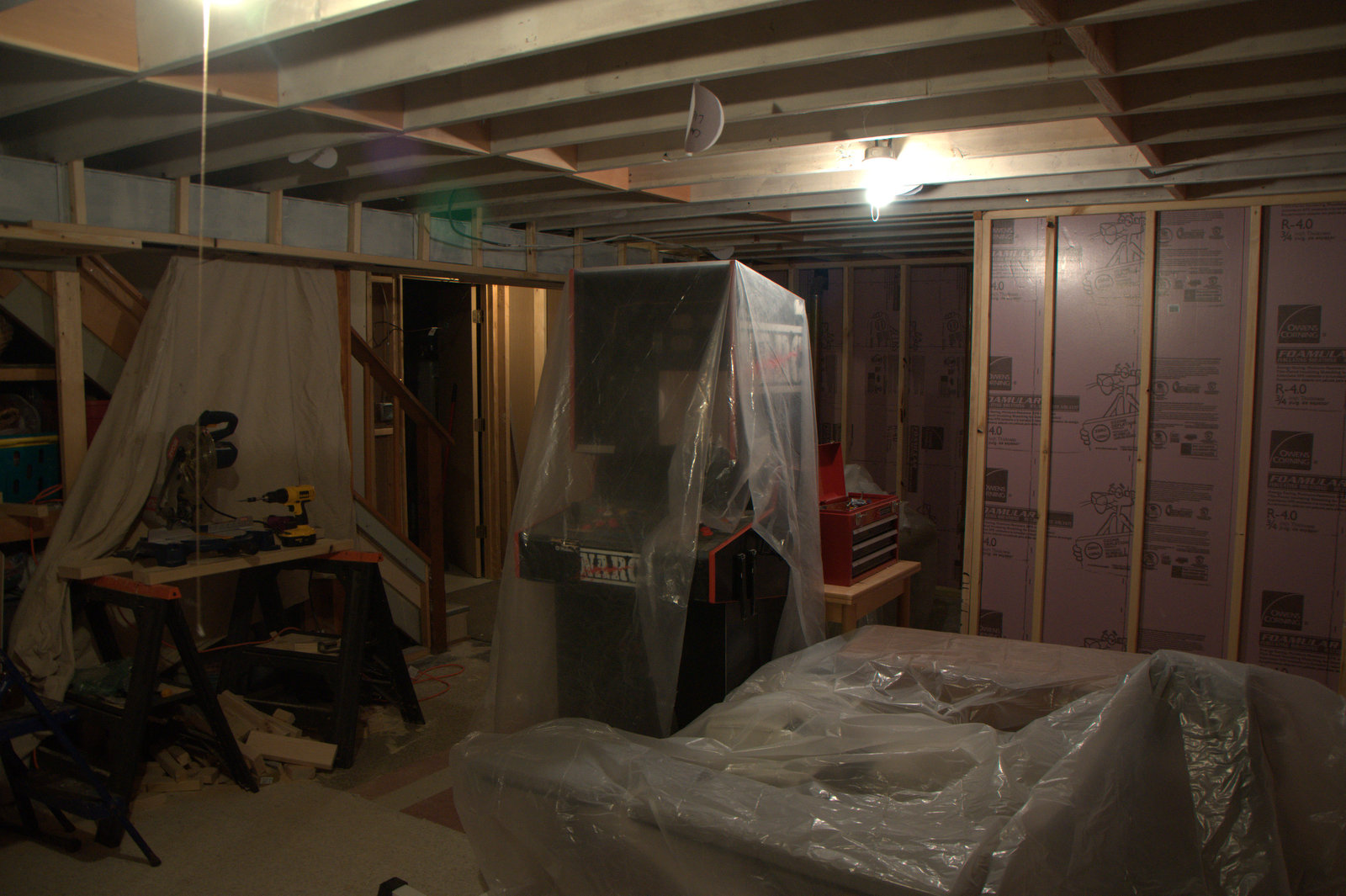 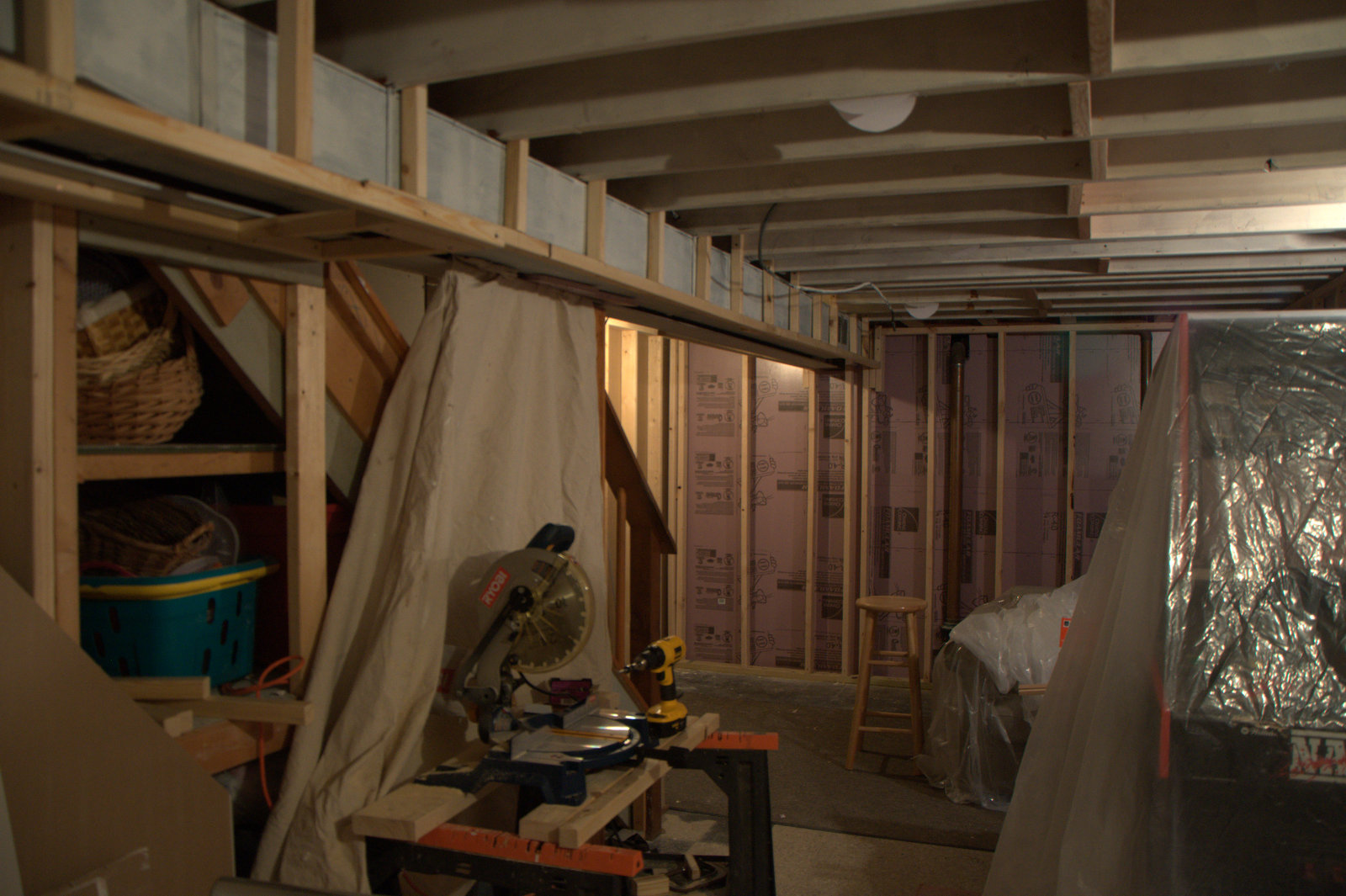