Remember this day. It is the day that the Dobson’s quit cable. We cut the cord! We broke the shackles! We tasted freedom from ‘THE CABLE COMPANY’ for the first time since before I got my first apartment in college.

We’ll probably be signing back up in a few months or when the girls and Julie get tired of not having it, but it’s fun and exciting for the moment and I loved being able to tell the Comcast lady (who was pretty rude) that I didn’t want or need her service and was cancelling. Felt SOOOOO good.

So here is the breakdown of where we started and what we ended up with.

Where we will be by the end of the week:

We ditched this totally. For content, we are going with a combination of HD OTA using the antenna I posted about last year, Amazon prime streaming, the library, and some other content that I am not at liberty to state how I get… We may have to sign up for Netflix or Hulu Plus if content becomes an issue.

For distribution to the end devices (TVs, PCs, iPad, iPhones), I made a few purchases today to make this transition easier.

I setup a third cell line on our family plan with AT&T for $9.99/month and got a non-smartphone for free with the new line of service. This new phone will have our existing home number transferred to it. I picked up the phone today and it should be switched over in a couple of days. 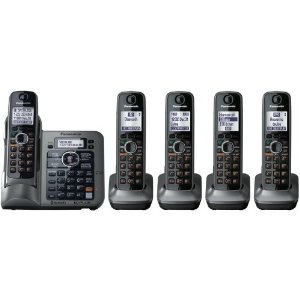 The one complaint Julie had with this plan was that she would miss the ‘feeling’ of having a home phone and have to run about the house looking for the cell phone when someone called. To eliminate this, I found a set of cordless home phones that have a feature called link-to-cell. You sync your cell via bluetooth with the base unit and then any calls you receive or make are through your cell phone. VERY COOL. Panasonic KX-TG7645M

The one service that is essential to us now… over the cable or home phone. So here, getting the fastest connection for the cheapest cost is what I was after. Comcast wouldn’t make me any deals and wanted $45/month for 12Mp/s. AT&T offered me a new customer deal of $24/month at the same speed for a year. Done. I figure this is probably the one service I will be switching back and forth between Comcast and AT&T if I need to in order to get the best rate. It’s pretty painless to switch and I don’t use my ISP for anything other than a pipe (no email or any other service).

Wow, big changes for the family…. I’ll keep you posted. Maybe this will force us to spend more time playing games as a family or watching only the things we really really want to see. Either way, it can’t be that bad and it’s a fun experiment. I can’t believe we don’t have cable. So pumped!! (the only major issue is what happens when football starts up again… hmmmm)

And no… there is no basement update. Still working on moulding. Grrr.