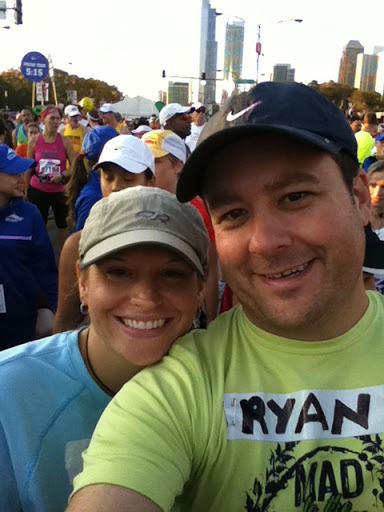 Man, there was seriously high anxiety in the Dobson house last week and especially on Saturday. Everything from who we are going to meet up with at the race, see during the race, when we are going to see the kids, Julie’s Dad and Sue, parking before the race, traffic after the race, preparing our gear, getting downtown for the packet pickup, etc. It was a crazy house around here. By the time we were standing at the start line, waiting for everyone to get moving, I thought we had certainly had enough. It took us almost half an hour to cross the start after the official start of the race, but all of that anxiety seemed to go away, at least for me, when we crossed the start. It’s amazing how running 26.2 miles will focus your mind.

We finished in 5:27. A respectable time considering the weather and Julie’s previous injuries. It got really hot in the last three miles and runners were just wilting in the heat. The medical tents were all filled as we passed the aid stations… casualties of the day. By the end of it, Julie and I both were ready for some medical attention, but we could walk and still had our senses about us. Thankfully Julie’s dad was there and was able to drive us home. I would have been capable, but it would not have been an enjoyable trip back. 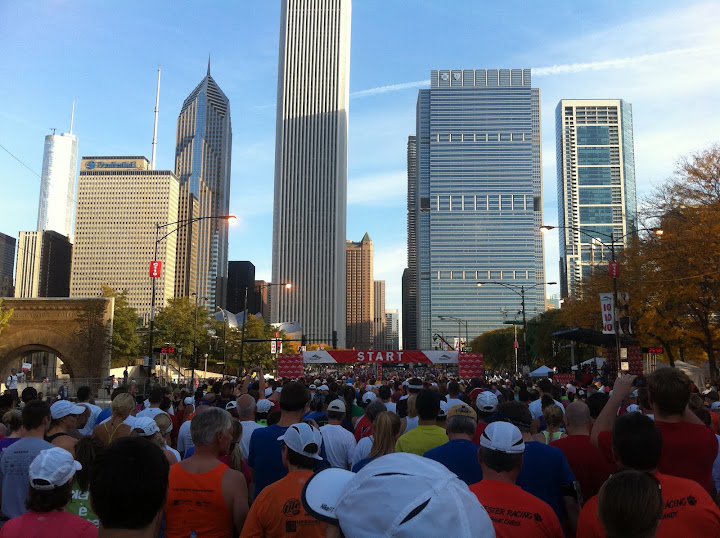 Two days post race and Julie and are on the road to recovery. I biked a little this morning and she is at the gym as I type this. Talk has already started about getting Julie a pair of shoes (goodbye Vibrams!) and what races might be next. I’m glad to see that Julie may have been bitten by the running bug because it is one of my true joys and I am happy to have company. Bring on the winter runs!!

Worst training run: Wednesday, Aug 4th. I started my run at 6:05 am. My iPhone died at 6:37:07 and never came back due to me getting caught in a torrential downpour that I had to run in for 3 miles. You can witness this tragic event because the RunKeeper app I use on my phone was running right until the very end. http://runkeeper.com/user/rdobson/activity/13973939

Best training run: Friday, Sept 17th. This was the 20 miler. I ran the first half with Julie and the second 10 on my own. I felt stronger at the end of the 20 than I have ever felt at the end of any long run I have ever done. My times reflect it too. The last three miles where the fastest out of the 20. 8:58, 8:59 and the last mile was an 8:34. These are the runs that make you want to just keep running. http://runkeeper.com/user/rdobson/activity/16625574

Best song to finish a run to: Fighter – Christina Aguilera. Start this song approx 3 min, 45 seconds from the end of your run, you will not regret it. Damn that woman can sing.

You’d think the 62k calories would have allowed me to drop some weight… in the end, I lost a total of 2 or 3 pounds.

Julie and I are running the 2010 Chicago marathon and today was our first significant run in preparation for the event. The marathon is on 10/10/10 this year and due to travel this summer (which means we’ll likely be training less), we needed to get started a few weeks ahead of what our training plan recommended.

We are following Hal Higdon’s Beginner Training Calendar which is the same training plan I followed when I ran the 2000 marathon with my dad. This plan has you running 4 days a week with 1 day cross-training. Usually it’s a Tues, Wed, Thurs run which range from 3 miles as the start of the training to 10 miles at the end. The fourth run is a long run and we are planning on doing ours mostly on Saturdays. These weekend runs range from 6 miles the first week to 20 miles in mid-Sept. where the training peaks. The cross-training day is Sunday.

Here is a google calendar link to our training plan (technically starts the fist week in June). Chicago 2010 Training Program

Lots of things to figure out: shoes, clothes, kid-watching help, work schedules, etc.  Training for an event like this takes a lot of effort and I am so excited that I get to do it with the wife.

I used an iPhone app named RunKeeper to track of today’s run. It has elevation, speed, etc. and the map it provides on their website is one of the coolest things for tracking runs I have seen. It’s just fun to play around with. I’m planning on tracking all my outside runs with this app.