The end of drywall work is in sight

So today is officially day 14 of working on the basement. After going back to work for two days (Thurs. and Fri.), I got back to it yesterday and today. It’s all about drywall finishing now. Taping, mudding, and sanding is the meaning of life until it’s done. This is by far my least favorite part of home improvement. It’s a pain and because I am not great at it, I need to do a few more cycles of mudding/sanding than the pros.

I bought a new sander to help and since we didn’t hire out the job, I thought a $30 tool to help things go faster was justified. Turns out, it wasn’t up to the job. The sander is manual and you can use screens or regular paper. It has an attachment that allows you to hook it up to a shop vac and it sucks around the sander as you work. It works pretty well, but not for a project this size. So after trying to do an initial sanding of the walls with it yesterday, I gave in and rented a power sander from Depot. I have used these a few times before and they are great, but you need to be very careful because they can be very aggressive. In the picture below you can see the manual sander with the attached hose as well as the power sander.

The sander gets heavy after a while and my arms as well as my back are killing me after two days of using this, but it is way quicker. It attaches to a vacuum you get when you rent the sander and for $30/day, it’s a pretty good deal.

So where am I at? I have put the last coats of mud on and have finished about 95% of the sanding. Mostly just touch up work remains that I need to complete tomorrow morning before the drywall primer goes up. When I return the sander tomorrow, I will be picking up a few gallons of paint for the ceiling and walls. The main room will get painted first because the stairway and soffit are a pain. Lots of small areas that I need to baby… sanding, mudding, sanding, etc. I am betting the stairway won’t be painted until Sat. 🙁

Protip: To make sure your mudding job is done, go around the walls with a high-powered work light set an angle to the wall. This will highlight any imperfections in the mud job before you prime. Credit goes to my father-in-law for teaching me this.

My goal was to have everything except the carpet done when I go back to work Wed., but I don’t want push things at this stage. Taking your time and getting the mudding just right makes trim and paint go so much easier.

When finishing a basement or doing any large project, you always run into a few snags or unexpected things. I’ll share two of mine… extending the air ducts to meet the new soffit and returning the soffit into the stairs.

First, the air ducts. The air duct that ran next to the i-beam had two vents into the basement. You can see them in the first picture below. Once we put up the soffit 2×2 framing, these vents needed to be extended the 2″ (1.5 for the 2×2 and .5 for the drywall… we used 5/8″ on the soffit, but the .5 made it a hair shy and is what we needed). The internet was no help so I went to Menard’s and then Depot looking for ideas. The original vents were 12 x 6 but I could only find ‘risers’ or sheet metal cut into a rectangle shape in a 12 x 4 size. I thought the smaller vent would actually look better since it would be centered on the soffit more so I bought some new vents and the riser material.

My brother helped out with this part of the project. We cut and shaped the riser material and then used foil tape and sheet metal screws to put it all together. It looks pretty good if you ask me. 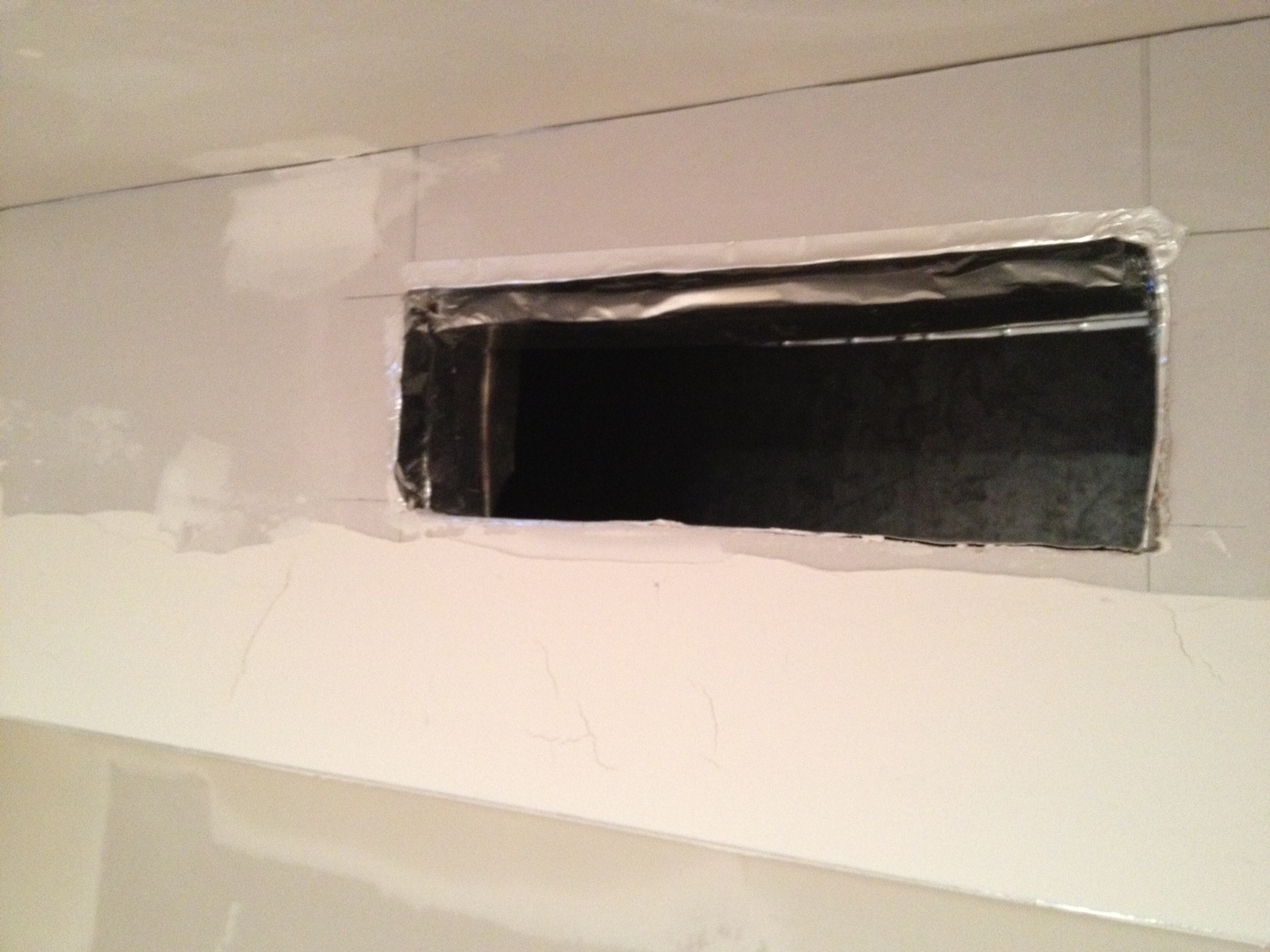 I got help with soffit return from my father-in-law. I framed and drywalled the return knowing that I didn’t like it, but pushed on knowing I would have to come back to it later. Well, the time came on Friday night because I had to get it resolved before all the drywall finishing got into full gear.

My first idea was to angle the return and then use some trim on it or something. I didn’t like it, but it seemed like it would work. My father-in-laws idea was since I was already losing the 2″ on the stairs, I should just bring the soffit all the way into the stairs. As you can see, this looks better and feels ‘finished’. The carpet and molding will go right up against it. Awesome!

I got a few comments that I didn’t post enough pictures… so here is a grouping to show the current state.

One of the best parts of any project is getting new tools. My new tool for this project is a Ramset which uses a small amount of gun powder to shoot a nail into concrete. If you have ever drilled into concrete to set those blue screws, you know what a pain that can be and why this new tool is so badly needed. The Ramset is $25 and ammo/nails will run you another 10-15 for a 100 count. Not bad at all, and have a mentioned how much fun this thing is to fire? It can be frustrating at times when the pin doesn’t engage right and you end up hitting the damn thing 4-5 times with no bang… but on the whole, it works great and saved me tons of time.

Here is a video of me using it. Two things to note about the video.

There is little doubt regarding my attraction to electronics, but this time I have hit the perfect match where my inner Tom Silva (oh, I’m name dropping) and geek are both extremely satisfied. Since we have moved into our house, which was build in 1962, I have taken on several improvement projects related to making it more energy-efficient. We replaced all the old, single-pane windows, new doors, insulated the upstairs attic up to R-43 and numerous others. All of these were done mainly to make the house warmer in winter. In the summer, we have big trees that shade the house and keep it pretty cool, but it gets pretty darn cold in some parts of the house during the cold, Chicago winters.

The most frustrating thing after completing these projects is knowing what impact they have. Yeah, the house ‘feels’ warmer and it makes you feel like you are doing something, but I need hard data! The gas/electric bill is one way to tell but fluctuations in weather make it too difficult to compare one month to another.

I think I have found a solution to my struggle. Bring on the Kintrex IRT0421. This infrared thermometer allows you to point the laser at any surface and get a temperature reading.

This little dream of a tool has been great fun for the past 2 days. I have been running around the house, pointing it at floors, ceilings, walls, etc. and have been surprised by a lot of the readings. Below is a reading off of our floor. The temperature for a majority of our floor is 63-64 degrees. This is fairly consistent except for one strip of the floor next to the fireplace. In that section (10″ wide and extends the 3′ from our exterior wall to the fireplace) the floor drops to 55.5!! Crazy… add that to the investigation list! 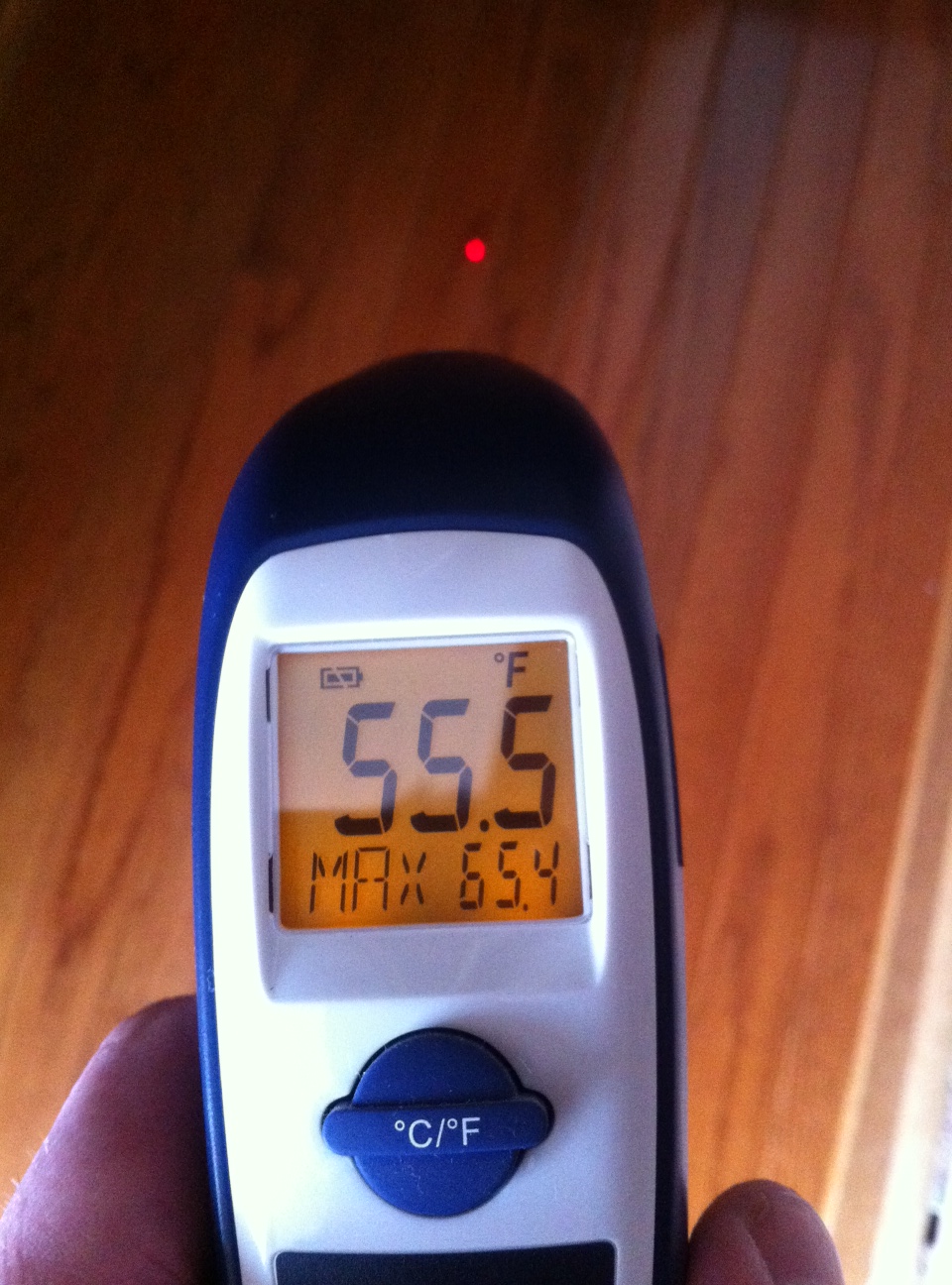 So what does all of this mean? Well, it means that next week, while I am off from work, I plan on spending a few hours going around the house and recording temperatures from various places. I’ll put that in a spreadsheet along with the outside temperature and what we have the thermostat set to. This list will allow me to prioritize my next set of improvements and also allow me to get before/after readings. Finally, I will have the hard data that I have been looking for that show me how much of an impact my improvements make!!! I am so pumped. 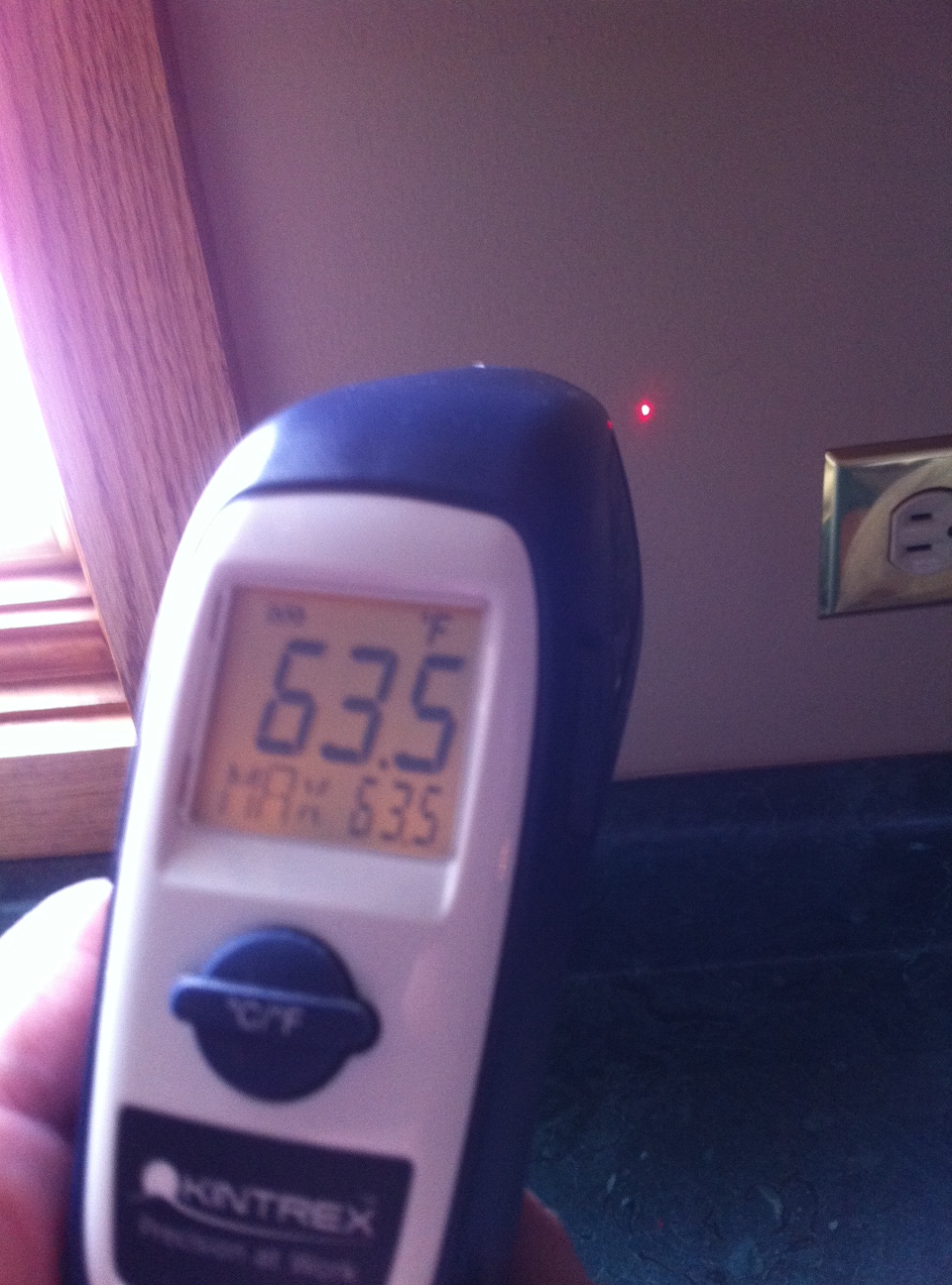 Oh, and as a side note, the kids LOVE pointing this thing not only at each other (Brooke was 90.2 degrees last night) but at random objects around the house. Our dinner last night was served at 142 degrees, Brooke’s stuffed penguin was 63 degrees. I had to yank the thing out of their hands finally…