I finally got around to getting most of the pictures posted. I have two sets below: the first is just a ‘best of’ that I think shows the best nature shots I took, and the second shows more of what it was like to travel 4600 miles in 2 weeks with the family.

The drive was uneventful through Minneapolis. We decided to stop at Mall of America and the kids rode in a giant blow up pineapple and I went with the girls on the Ferris wheel. At at the food court and got some fresh backed cookies from the tollhouse store for the road.

Julie slept and I rocked out to the stones and the who through Fargo. Past Fargo, we stopped for gas and I almost messed things up by opening the gas door while the side door was open. The door would not shut and I had to shove a magazine between the door and the gas door to force it shut or shut enough to move the door. It gave me a few minutes of anxiety while the girls were using the bathroom. 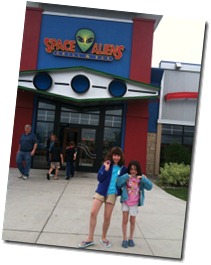 Arrived in Grand Forks and went to the Space Aliens Bar & Grill. Kind of a cool place and something a little different. We finished the night with some time in the pool and Julie went running on the treadmill (barefoot!!) while the girls and I played.

Plan is to be up early tomorrow for breakfast and then on the road, next stop: Medicine Hat.

Today started out with significantly better weather. After 4 hours of rain yesterday, the sky has cleared and the sun is out. Our drive today takes us from Grand Forks, ND to Medicine Hat, Canada. We are heading directly west from Grand Forks across a good portion of North Dakota and then heading north across the border. The kids are watching The Neverending Story this morning. As soon as the movie started Maddie blurts out “we’ve seen this before!” Dang it!! I thought this was going to be so awesome and apparently their cousin has the movie and they watched it with her without me knowing. Oh well, they are still watching it again. Julie has the first driving shift and is jamming to U2 (shocking).

We did a quick stop at the ‘middle of north America’ land mark which was a welcome surprise. Who would have guessed the middle would have been in some town in the middle of North Dakota…. although when I think about it, I guess it makes sense.

Crossing the boarder was quick but a few things we noticed right away: more trains and more oil fields. It is pretty amazing how many oil fields they have going through southern Saskatchewan. They have done a lot of mining in the area as well which has left the land with a burnt out, naked feel to it. Lots of browns and not much green.

We also passed a very cool operation underway with the road construction. They has a machine tearing up the road and then several hundred yards behind it, the machine laying down some fresh oil followed by the machine laying the new asphalt. Very cool and very efficient.

Just a hop from Medicine Hat to Banff. That’s what it was supposed to be, but it felt like the longest leg of the trip. Mainly due to us being anxious about arriving here but it certainly felt longer than the 4.5 hours we planned it to be.

We ended up going right through the middle of Calgary. The thing that caught me most off guard about the trip was the stop lights on route 1 through the city. The damn trans-Canadian highway is broken up by stoplights. Needless to say, this wasn’t the most well thought out plan for whoever decided to make a major highway would benefit from stop and go traffic. Oh, and the city decided that 10 am on a Monday was a great time to put up new flags in celebration of something on all the street poles so we got merged down to one lane for that.

As we approached Banff, it was obvious that the weather was turning bad and when we finally got here, we were not let down. Pouring rain, hail, and cold (45 F) made us all feel like we had just endured this long trip only to be greeted by a huge let down. But after checking into our hotel, getting something to eat and enjoying the pool, the weather cleared a bit so we went for a walk. Took a lot of photos. Here’s one group shot and then one the elk we saw. This short walk, less than 100 yards from our hotel, just reassured me why we came. Damn, this place is awesome! 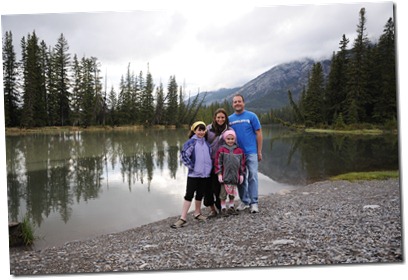 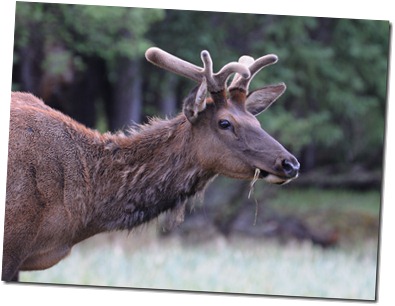